This release adds improvements and bug fixes to v1.21.1. The download links are at the bottom of the page.

We recommend that you back-up important transform files before installing any new release. Please let us know of any problems or issues you encounter with the release.

You can uninstall old releases after you have successfully installed this version.

1. Previously inserting new transforms between existing transforms could mess up column related parameters downstream. This should now be fixed. However this is a complex issue, so please let us know if you come across any remaining problems related to this. Thanks to various people for reporting this.

2. The Join, Lookup, Subtract and Intersect transforms now have a case sensitive matching option. Thanks to Dan F. for the suggestion.

3. Output items that are outputting to Excel now default to Output mode = Overwrite/Sheet, rather than the previous default of Overwrite/File.

4. The layout of newly added items in the Center pane is now improved. Thanks to Ziad Y. for suggesting this.

5. The Filter, If and New Rows transforms now initialize much faster when first added.

6. When an Excel spreadsheet used in an input is moved, or a sheet is renamed, you are asked to choose the new file location and sheet. The old sheet name is now provided as a hint. Thanks to Ziad Y. for suggesting this.

7. The Sort transform has been speeded up for text columns. Sorting 7 million rows by a column of text during testing, the time was reduced from 220 seconds to 18 seconds. Thanks to Marcus A. for suggesting this.

8. Added a Clear button to the Right pane of the Sort transform. 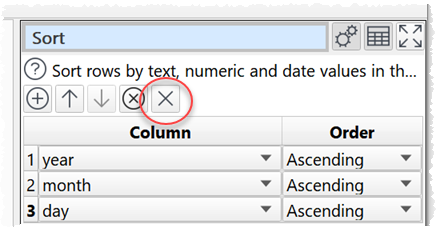 9. A newly created Sort transform now has no sort levels. This is quicker when sorting large datasets. The fact that sort levels need to be added is also made clearer with a red outline and ‘ghost’ text.

10. There is now an ignore empty columns option when inputting from file or clipboard. Thanks to Holger S. for the suggestion. 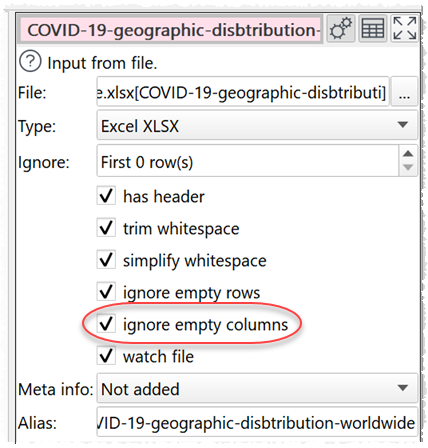 11. Additional Is empty and Is not empty matches are now available in the Filter, If, New Rows and Slice transforms. Thanks to Mark K. for the suggestion.

12. Previously when the Delimiter was set to Automatic for delimited text files, the number of commas, semi-colons, colons, tabs, pipes and carets were counted and the most common was set as the delimiter. Now colons are ignored, as they are often used in time values and URLs.

13. Enabling/disabling of controls in the Right pane have been improved for the Split Rows transform.

14. Fixed a crash that could occur if clicking the Center pane during processing.

15. Fixed a bug where no header was written to empty Excel sheets when write header and if empty were checked in the Right pane for the output item. Thanks to Torben S. for reporting this.

16. Fixed some issues where pop-up windows did not appear on the same screen (of a multiple screen display) as the main window.

17. Fixed a bug in the Lookup transform that could occur previously when Bottom values used was All and multiple keys had common values.

18. Fixed a bug where delimited text files without a final carriage return could show a spurious “Number of values per row vary” warning.

19. Fixed an issue where Arabic (and perhaps other non-Latin text) written to an Excel file could be corrupted. Thanks to Ziad Y. and Jimmy H. for reporting this.